The Eagle Farm facility – home to NIOA’s corporate headquarters, warehouse and distribution centre – accommodates more than 100 staff including project managers, engineers, administration and operational personnel. The company has more than doubled its Brisbane workforce since moving to the Eagle Farm facility in 2014 as the defence industry gains momentum.

Minister Dutton congratulated NIOA on its achievement and said the Federal Government would continue to focus on support of defence industry over the coming decade.

“The Morrison Government has committed $270 billion over the next decade to make sure the men and women in our defence force have the equipment, the resources and the capability they need to perform their role to the best of their ability,” Minister Dutton said.

“We can only achieve these outcomes by working with our defence industry partners across Australia and around the world, and I commend NIOA for their vision to expand that industry here in Brisbane.”

“We are delighted to open this building which will give us the capacity to grow into the future,’’ he said. “Not only is it a significant moment in our near 50-year history, but it also creates the best environment for our loyal employees and is a clear demonstration to all our customers of NIOA’s long-term commitment to delivering world-leading products and technologies.’’

Designed by award-winning Brisbane architects KIRK, the extension has a magnificent glazed central courtyard for staff while the upper levels will house the executive team, project managers, weapons and munitions engineers as well as the dedicated LAND 159 team.

NIOA is the prime contractor for Stage 1 of Tranche 1 of the LAND 159 Lethality Systems program to modernise the Army’s weapons systems.

More than 40 jobs were created on the Brisbane site at the peak of construction which was led by BESIX Watpac.

The Brisbane extension is part of a $130 million capital investment by NIOA which includes a $60 million artillery shell forging plant in Maryborough with joint-venture partner Rheinmetall Waffe Munitions, a $13 million upgrade of the Australian-government owned munitions plant at Benalla in Victoria and a $2 million refurbishment of its Canberra office.

Munitions and small arms research, design, development and manufacture have been identified as one of the Federal Government’s top Sovereign Industrial Capability Priorities (SICP). 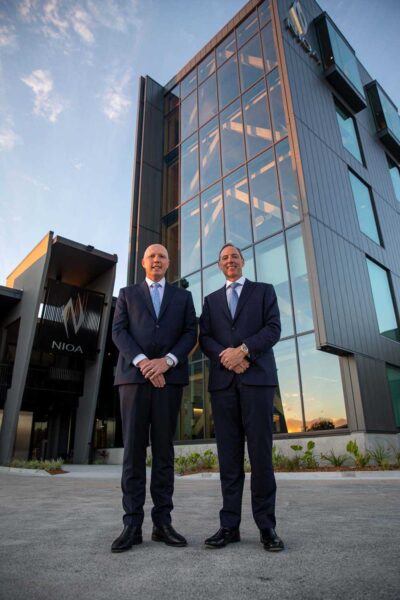