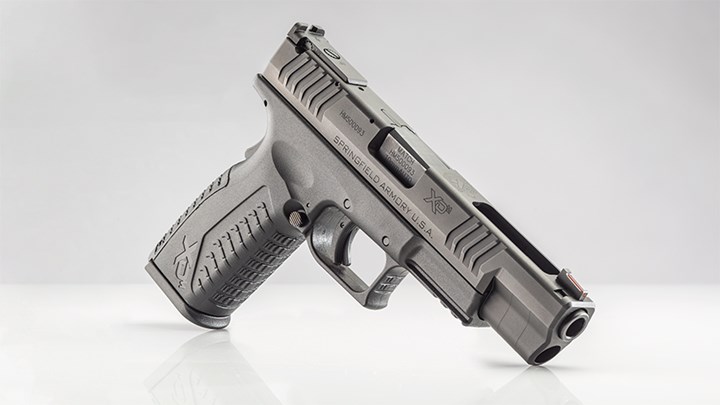 As I write this I’m sitting in a tree during Oklahoma’s late archery season, waiting for a whitetail buck or a wild hog. Hanging from a hook on my left is my bow; on my right hip hangs a sidearm. Whether I’m bowhunting at home or in the grizzly country of Wyoming—or driving to the quick-stop for chicken strips later—the sidearm remains constant. This one is a 16-round Springfield Armory XD(M) semi-automatic pistol chambered in 10mm Auto. And it makes me feel good.

Previously I had to make a choice when I chose a sidearm to go with my bow or rifle. Either I could opt for something powerful enough to hunt with like a .41 Rem. Mag. or a .454 Casull, or I could choose a gun purely for self-defense like a Glock 19 or one of umpteen other concealable pistols on the market. Trouble is, .41s, .454s and the like are most commonly steel revolvers, and these guns only hold five or six rounds and weigh 3-4 pounds. Lugging one on my hip all day is about as much fun as measles. Conversely, popular polymer, self-defense semi-autos are great for carry but most come in 9mm, a round that is decent for home defense at 3 yards but one that sucks for big game.

Springfield, however, now offers the more potent 10mm Auto in a 33-ounce, 16-round (15-plus-1) handgun that is easy to carry, is not impossible to conceal and offers serious firepower. Before we get to the gun, let’s look at the ballistics of the 10mm cartridge.

To be clear, the 10mm, like most other semi-auto handgun rounds, is no magic pill; for hunting at moderate distances it is marginal at best. Nonetheless, if quality bullets are chosen, ranges are kept close—preferably 25 yards and in—and shot placement is ideal, the 10mm can be used to good effect. (Just don’t expect dramatic results like those from your .308 rifle.) In the event of a charging bear, I’d much rather have it over a 9mm, just as I prefer its capacity advantage over a heavy revolver. The 10mm offers a great balance between the two. So now let’s get to the gun.

In its 17th year of production (and 20th if you count the HS2000 pistol before it was licensed and renamed by Springfield), I’d be surprised if you aren’t familiar with the wildly popular XD series of striker-fired, polymer pistols. Made in Croatia for the American firm, the XD and newer XD(M) have proven to be accurate, concealable, affordable and supremely reliable. They offer several features that other polymer pistols do not, such as a slightly more acute grip angle, a grip safety, great metal sights and copious included accessories. They’re also reasonably priced. Over the years, the XD and XD(M) have been offered in dozens of sizes, barrel lengths and chamberings. The latest is the XD(M) version in 10mm.

Like all the XD(M) models, this 33-ounce handgun features interchangeable backstrap grip panels to fit three sizes of hands. Let me tell you, when shooting a 10mm in such a light gun, the proper grip size is important for recoil mitigation. The 10mm in the XD(M) is snappy but not painful. The small grip frame allows me to find and press the magazine-release button without changing my grip as I must on other guns like the competing Glock 40.

The XD(M) is one of the safest handguns on the market with its 1911-style grip safety and lever-type trigger safety. The lever integral to the trigger (Springfield calls it the Ultra Safety Assurance Trigger System), as well as the grip safety, must be depressed in order to fire the gun. While I’m still not sure if both are completely necessary, on a hunting gun that will be in and around brush and dogs and trucks and buddies, the combination is not a bad idea. It does not interfere with function or reliability in any way.

It took 30 years for shooters to quit comparing the triggers of striker-fired pistols to the single-action triggers of 1911s; most shooters have now accepted triggers with built-in safety levers and agree they are just fine. The one in this XD(M), in fact, with a measured pull weight of 6.4 pounds, is better than most.

The XD(M) also has a loaded-chamber indicator at the rear of the chamber that’s lifted by a chambered round. It can be seen and felt, and it does not lie. An indicator that protrudes through the back of the slide lets you know when the striker is cocked.

Sights consist of an adjustable rear notch and a front blade. Although I feel like the front sight’s enclosed fiber-optic tube is a bit for show, the sights are still wonderful. The rear sight’s elevation and windage adjustments feature audible, positive-feeling click-stops as well as a metered viewing index that helps you get the perfect zero.

While the slide has a cutout near the muzzle to reduce weight and assure optimal cycling, the one complaint I have is the lack of a rear cutout for an optic. Mini reflex sights are proving to be superior sights for speed and precision shooting, and I feel Springfield dropped the ball here. After all, hunters wouldn’t have to install the optic if they didn’t want it. Not having the benefit of an optic was certainly reflected in my groups, as I just shoot better with one. With the irons from sandbags I averaged 3.75-inch groups at 25 yards. Reliability was 100 percent.

After carrying it to a treestand, hunting with it and carrying it concealed, the XD(M) became part of me. It fit nicely under my jacket so it didn’t clank around when I was sitting in my stand. I love the fact that Springfield provides three 15-round magazines and a nice hard-plastic travel case with each gun. For hunters, 16 rounds of 10mm hanging unobtrusively near the right hand is a confidence-inspiring tool indeed. Now, if only a hog would walk on by … .